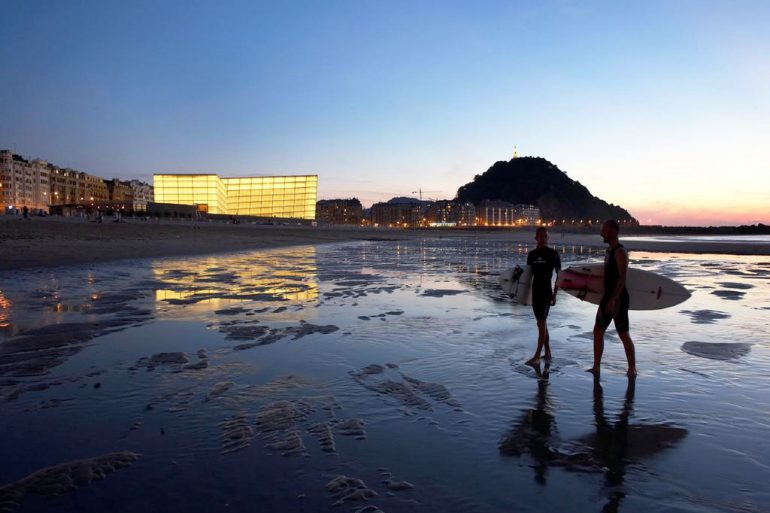 A work meeting Surrounded by waves, beaches and (Michelin) stars

While boarding my airplane in New York on the way home I heard two New Yorkers talking about Spain. One of them knew the country well. For the other one, it was his first trip.

I don’t believe in those labels. There are many wonderful corners in Spain and the world. However it is true that San Sebastian appears in all the international rankings as one of the most beautiful in the world: NYTimes, CNN Travel, Conde Nast Traveller…

For me, it is difficult to judge; at the end this is my home. A small city surrounded by three large beaches, waves, saltpeter and wind. This city has so much to offer: a cozy bay embraces fishermen, canoeists, sailors and surfers…; a great gastronomic culture (16 Michelin stars), a historic old quarter which hides one of the best routes for tapas*; a long history of royal visitors, summer palaces and “belle époque” hotels by the sea…

The Congress Palace Kursaal is located in one of these three beaches and it was designed by Rafael Moneo (Pritzker 1996). Two giant rocks of translucent glass panels (called “the cube”) stand and mix with the real boardwalk rocks. This place is perfect for tailor-made corporate events. The Kursaal is equipped with flexible conference rooms and 2 different auditoriums. Of course accompanied by a luxury catering or a special menu in the restaurant, led by Aduriz (chef 3 Michelin stars)

The 52nd jazzaldia starts on July 20th with concerts on the terraces that surround the Kursaal. Although the greatest show will last only a few minutes: when the Sun starts to disappear on the horizon, reflected in the huge windows that make as a backdrop for the stage. Sure that at that time the sound of a trumpet and a hoarse voice will break the perfection of the city!